The state government monitors the population of South Australia which continues to grow and change.

The state government prepares population projections every five years, following the release of the Census of Population and Housing published by the Australian Bureau of Statistics (ABS).

The Australian Bureau of Statistics (ABS) releases estimates of the resident populations (ERP) of Australia and the states and territories on a quarterly basis.

These estimates are based on the results of the most recent Census of Population and Housing which was conducted in 2016.

The following chart shows annual population growth by components from 2006 to 2021:

90.6% of South Australia's total population growth between 2015 and 2020 occurred in the Greater Adelaide Capital City region.

All five Greater Adelaide Capital City sub regions experienced population growth during this period. The regions with the greatest growth were:

Of the six regions in the Balance of South Australia, four experienced population growth during this period. The region with the greatest growth was Fleurieu - Kangaroo Island which increased by over 3300 people during the period, followed by Barossa – Yorke – Mid North, with a growth of 2550. The Outback - North East region experienced a decline of 1600 people.

The annual population growth for Greater Adelaide Capital City and the Balance of South Australia for 2015 to 2020 is displayed in the figure below.

Between 2015 and 2020 the Playford, Port Adelaide Enfield, Charles Sturt, Salisbury and Onkaparinga LGAs experienced the greatest population growth, with each gaining more than 6000 residents. There were significant disparities in population change in the Balance of South Australia LGAs between 2015-20. 29 LGAs experienced a growth in population, compared to 22 experiencing a decline.

Alexandrina LGA which includes the townships of Strathalbyn and Goolwa, recorded the greatest increase in population at 1673 people which is likely due to its close proximity to Adelaide. The next largest increase was in Murray Bridge, with 1573 additional people, followed by the Barossa with 1416.

Whyalla LGA recorded the greatest population declines during the 2015-20 period with a loss of 1164 people, followed by Port Augusta which declined by 745 people.

Over the 2015-20 period South Australia recorded a modest average annual growth rate of 0.8%, which was the lowest of all states and territories other than Northern Territory. In comparison, the eastern states of Victoria, Queensland, and the ACT experienced a growth rate greater than 1.5%.

The three most populous states of Victoria, New South Wales and Queensland accounted for 86% (1,624,206 people) of Australia's population growth between 2015 and 2020, compared to 3.7% for South Australia. 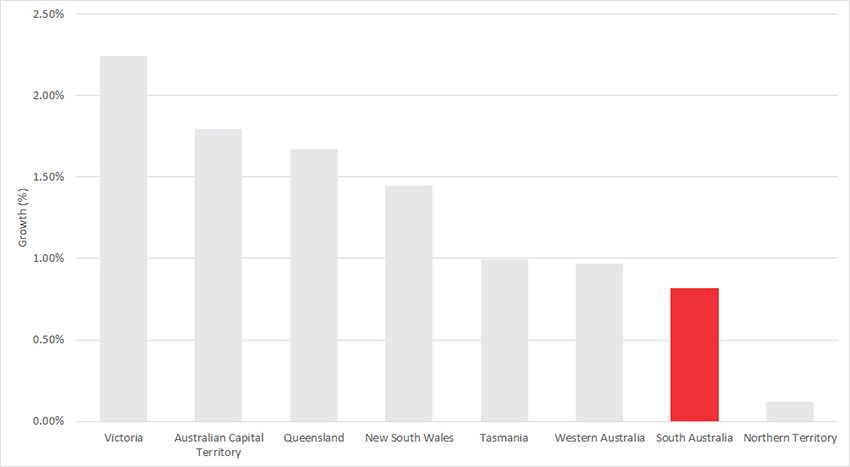 The state government provides population projections at several geographic levels which are updated every five years.

These projections follow the release of final figures from the most recent Census of Population and Housing published by the Australian Bureau of Statistics (ABS).

Population projections help us to understand the most likely future size, age structure and distribution of the population of the state. These projections are fundamental to urban, transport and infrastructure planning.

These population projections comprise three series (high, medium and low) that reflect the likely range of population futures for South Australia and regions.

The medium series is the likely outcome at the time of publication, while the high and low series enable management of risks  if a population trend that is higher or lower than the medium series emerges.

The projections are based on the final results from the 2016 Census of Population and Housing and supersede those published in 2015. The South Australian Cabinet endorsed the projections for use by State agencies on 17 June 2019.

The following three visualisations summarise projected population and demographic change for South Australia and regions. You can also view these visualisations in a new window.

Users of these projections should carefully read these explanatory notes before downloading the projections.

Population projections are not forecasts of the future. They are estimates of the future size, age structure and geographic distribution of populations based on particular assumptions about future fertility, mortality and migration.

There are 11 population projections regions in South Australia which are based on Australian Bureau of Statistics (ABS) SA3 and SA4 boundaries (ABS ASGS definitions).

There are 5 population regions in Greater Adelaide Capital City which are part of the ABS Greater Capital City statistical area:

There are 6 population regions in the Balance of South Australia: Are you looking for a development application?